The fiber that almost ended it all....

So my year didn't go real well last year.  Too much spinning resulted in achilles tendonitis in both feet and several months of physical therapy.  But I'm back at my wheel and spinning and I thought I should get back to blogging a bit, too.  To celebrate my latest attempt at blogging I thought I'd share a story about the fiber that almost ended my spinning career.

Christmas 1995 brought some money and no one was terribly surprised when I made a detour into the spinning shop in Shipshewana, IN, and bought a wheel with that money.  January 1996 brought a huge box to my landlady's doorstep and that winter found me dutifully sanding and (when it was warm enough to open the window) staining my new baby.  Susan was assembled and ready to go well before the Maryland Sheep & Wool Festival in May.  I plotted.  I planned.  I searched maps to make sure I knew where I was going.

Those who know me have heard the story of my first Sheep & Wool Festival where I used a credit card at a booth and forgot my card there and the woman at the booth very nicely contacted the card company and cancelled the card for me.  But I don't normally tell of my other purchases that weekend.  In addition to the fleece I bought some very nice brown roving.  I have recollection of the sheep breed or anything other than the fact that I bought some nice brown roving.  I also bought some dyed roving.

This is what I bought. 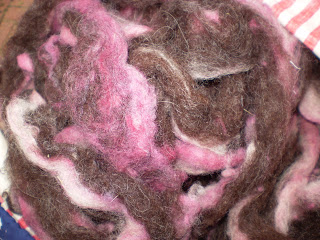 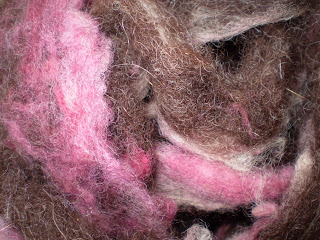 It was exactly what I was looking for.  18oz, great colors, a Border Leicester/Romney blend that I figured would be easy to spin.

I didn't try to spin it straight away.  I worked two jobs and was busy and tired a lot.  But I would pull the fiber out sometimes and admire it.  I bought a chair that I thought would be perfect to sit in while I spun.  And then one day I finally sat down to spin it.

I remember sitting there one night, looking at the measly two skeins I'd managed to spin and at the pile of roving still waiting to be spun and I just cried.  I cried because the magic was gone.  I couldn't figure out what I was doing wrong.

And I cried because I was sitting there in front of this beautiful spinning wheel that I had labored over thinking to myself, "Did I really spend all that money on something that I'm never going to use and that I will always hate?"

But still I remembered how much I'd loved spinning when I took that class.  So one day I opened up the bag of brown roving and I sat down and started to spin.  And the magic was back.  The fiber drafted beautifully.  The resulting yarn wasn't perhaps the sort of thing they write songs about, but it was consistent and reasonably well spun and it made me happy.  And May 1997 found me back at the Maryland Sheep & Wool Festival buying some carders and a couple of fleeces.

I dug out that first roving recently.  I have no idea all of what is wrong with it.  Some of the problem is that it has lots of second cuts and slubs in it.  It will never be a smooth yarn.  But there's something else wrong with it, too.  It's sticky.  I don't know if the wool itself wasn't washed well or if there was something wrong with the dye.  But it's sticky.  I can feel it on my hands when I'm spinning and after.  It's just nasty feeling.  The yarn I spun all those years ago, though, washed up fairly nicely, so I'm attempting once again to spin this roving.  This time I'm prepared, though.  This time I know what I'm getting into.  And this time I have other projects to work on when the frustration level gets too high.  I will conquer this wool and it will be out of my stash and I will know that it was unable to prevent my love affair from flourishing.

Oh, but it was a close call.
Posted by GregoryRoad at 3:26 PM No comments: